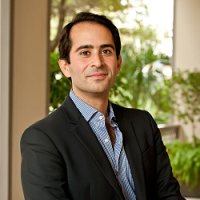 Cyrus Sigari is a lifelong aviator, entrepreneur, and investor in all things UP.

As co-founder and Chairman of jetAVIVA, Cyrus led the firm to become the largest private jet sales organization in the world as measured by total annual transaction volume. Cyrus turned his passion for flight into a business that has helped thousands of individuals and companies enter and enjoy the world of jet ownership.

With more than 25 years and thousands of hours of aviating experience, Cyrus is an instructor pilot in 13 different jets, including the Boeing 747, has owned dozens of aircraft, is a helicopter pilot, an experienced acceptance test pilot, and formerly a nationally-ranked competitive aerobatic pilot. Cyrus currently owns and operates a CitationJet and a Bell 505 helicopter.

In addition to his jetAVIVA responsibilities, Cyrus is also the co-founder and Managing Partner of UP.Partners, a $200M early stage venture capital firm that invests in key enabling technologies that support a multi-dimensional future (drones, flying cars, etc.).  Cyrus is considered one of the world’s experts on the burgeoning field of advanced aerial mobility which is forecast to be a $1.5 trillion market by the year 2040.  In partnership with the Walton Family in Bentonville, AR and Perot Family in Dallas, Cyrus is responsible for hosting the UP.Summits which Wired Magazine has coined as “The Secret Conference Plotting the Launch of Flying Cars”.

Born to refugee parents who fled Iran during the Islamic Revolution, Cyrus Sigari entered the world as a first generation Iranian-American in 1982. From his earliest memories, Cyrus was consumed by his passion of flight. At the age of 11, Cyrus took his first flying lesson, and then soloed at 16. He earned his private pilot certification at 17, and at 18, became one of the youngest flight instructors and commercial pilots in the United States. He received his airline transport pilot certification at age 23.

Cyrus’s passion for flight quickly transitioned into a lifelong profession. He went on to graduate from Purdue University with a degree in Aeronautical and Astronautical Engineering. After graduation, Cyrus worked as a propulsion systems engineer and flight test engineer for Eclipse Aviation, where he was credited with leading the team that certified the first new aircraft fire suppression system in more than 50 years. His work at Eclipse earned him several EPA awards.

Cyrus is also the Chairman of the Young Presidents Organization (YPO) Aviation Network and a founder and board member of the Citation Jet Pilots (CJP) Owners Association. In addition, Cyrus is a sought after author, with articles having been published in AOPA Pilot, CJ Magazine, Twin & Turbine, Plane & Pilot, Aviation International News and Pilot Journal magazines.

In addition to his professional accomplishments, Cyrus is a self-admitted adrenaline junkie having completed several long distance endurance races and adventures to include the Ironman Triathlon, kayaking all 277 miles of the Grand Canyon, summiting the tallest mountain in Poland in -30 deg C in his shorts, a graduate of the Boulder Outdoor Survival School, and successfully rode on the back of a 1200 lbs. Grizzly Bear.