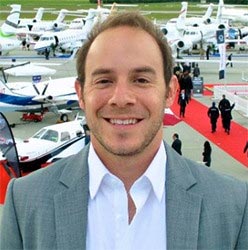 Jason initially fell in love with aviation at an early age accompanying his father on business trips around the world. After graduating from Texas Tech University, Jason established a successful career as a mortgage banking analyst, and later as a business development manager. Jason's passion for aviation was eventually reignited on a sales call with a pilot friend, which inspired him to pursue a career in aircraft sales.

Jason specialized in light/mid jet sales and market analysis for the last three years with another aircraft broker before joining the JetAVIVA team in 2016. Jason is based in our Austin, TX office.​