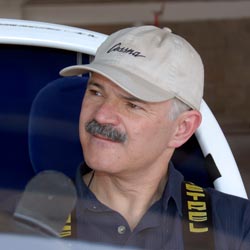 Ever since he was a kid, Gonzalo has been an aviation enthusiast and always dreamt of becoming a pilot. However, life took him down a different path and he ended up earning a degree in Industrial Design; he then worked in the acrylic furniture design business, learning many valuable life and business lessons.

After spending some time living in France, where he started sky diving, Gonzalo returned to Mexico, determined to get a job in aviation. A few years after selling aircraft parts while working for the Beechcraft Representative in Mexico, he sold his first jet in 1991: a brand-new Beechjet 400A.

In 2000, Gonzalo achieved his childhood dream of becoming a pilot and obtained his Private Pilots License to fly single-engine aircraft.

For the past 20 years, Gonzalo worked for the Cessna Representative in Mexico, selling new Citations. And now, with over 30 years of experience in aviation, he has joined jetAVIVA to handle all sales in Mexico and other Central/South American countries.

He loves camping, whitewater kayaking, and traveling around the world with his wife and two kids chasing Solar Eclipses. Apart from speaking Spanish, his native language, Gonzalo speaks English and French.