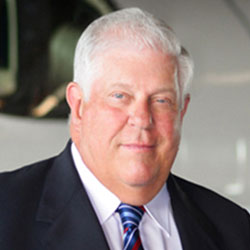 Don Richards has been selling aircraft for more than four decades. His previous roles have included being the President of Jet Quest and Don Richards Aircraft Sales. Don brings valuable insight based on his 40 years of experience in the industry. His background as an aircraft dealer is valuable in assisting clients with acquisitions as investments. With over twenty years of focus on King Airs and Citations, his product knowledge is a great resource for our clients. Don is based in Georgetown, Texas.

Don is an ATP rated pilot with over 8,000 hours of flying. He enjoys spending his spare time with his two Sheltie dogs (named Barnes and Noble) and cruising in his RV with his companion, Pam.