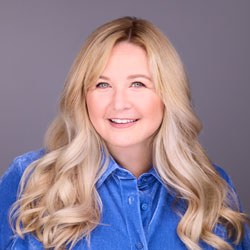 Denise Wilson leads jetAVIVA’s sales efforts on Citation models such as the CJ, M2, Encore, and Bravo. She was previously the President, CEO, and Founder of Desert Jet, a group of aircraft charter, management, maintenance, and FBO companies.

Denise Wilson leads jetAVIVA’s sales efforts on Citation models such as the M2 and CJ3+.

Denise’s strength is in helping future aircraft owners realize their dream of aircraft ownership through in-depth financial and operational planning, and expansive aircraft knowledge. Her expertise comes from over twenty years of experience in flying, managing, operating, acquiring, selling, and instructing in jet aircraft, with an emphasis in Cessna Citation aircraft. She has over 9,000 hours of flight time and eight type ratings, along with CFI/CFII/MEI, with a significant amount of flight time in multiple Citation models, both single-pilot and crewed. She has flown for several airlines including Aloha Airlines, and is a former airline captain, Chief Pilot, Director of Operations and Check Airman.

She was previously the President, CEO, and Founder of Desert Jet, a group of aircraft charter, management, maintenance, and FBO companies that made the Inc. 500 list of the nation’s fastest growing, privately owned companies five consecutive years. She currently is a member of the Board of Directors for Angel Flight West, which is her favorite philanthropic organization.

Denise is a vocal advocate of business aviation and frequently promotes the value that aircraft ownership brings to businesses and individuals. She has been featured, published, and quoted in Inc. Magazine, the Los Angeles Times, Business Jet Traveler, Forbes, Fox Business, Entrepreneur Magazine, Palm Springs Life, Barron’s, the Wall Street Journal, and Aviation for Women Magazine.