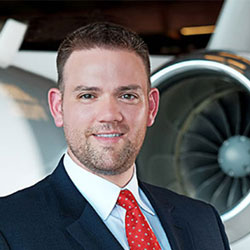 Ben Dow grew up at the airport through a family aviation business. He is a second generation aviation professional and was formerly the Director of Aircraft Sales at FirstFlight in Elmira, New York. Ben is a graduate of Ithaca College where he played football and earned a degree in communication. Although not a licensed pilot, he has enjoyed many hours as a copilot. Ben and his wife, Shannon, have two children. Ben is based in Syracuse, New York.